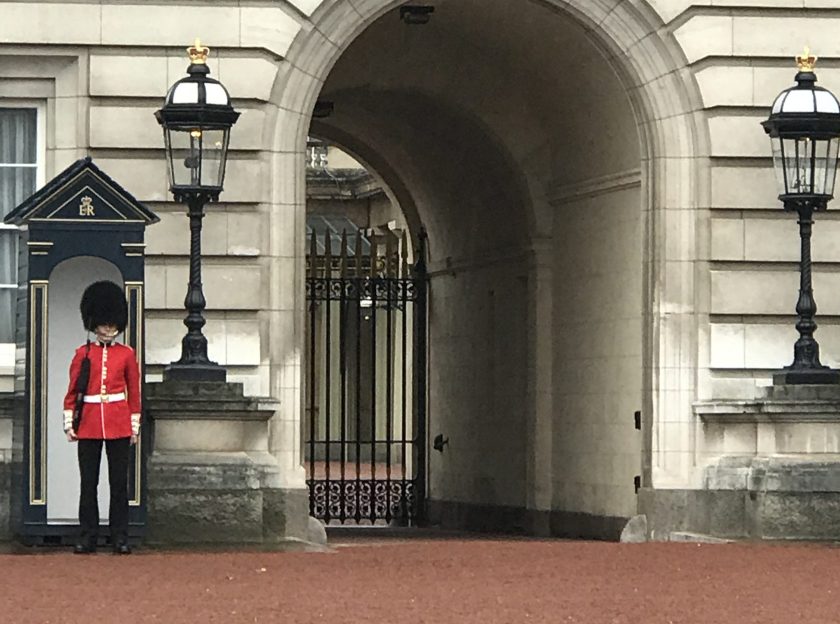 The United Kingdom is the land of my childhood fantasies. I daydreamt of magic and dragons and knights and castles. Of quests and epics on a far grander scale than the peaceful time and small island I grew up in. I’m half-convinced my Hogwarts letter was dropped in the Pacific. Or that had the time and place and genealogy been different, I could’ve accompanied Arthur in his quest for the Grail.

Needless to say, turns out modern day England is a bit different. When I first went to England, it was for my high school band trip. We went and did almost as much as you can as a 15/16 year old could in London- Saw the London Bridge, Buckingham, Big Ben, Stonehenge, The British Museum, etc. etc. I was simultaneously fascinated by a city so old and different than what I had grown up in and yet also very ‘normal’. While it wasn’t supernatural, it was an experience I’d carry with me the rest of my life. I felt like I really got the full English.

So what could draw me to England again when there’s so many other places I could’ve seen (for the first time)?

The answer was soccer and scotch. Or football and whisky if you’re from across the pond. When I was there for the first time I missed two crucial parts of English culture- drinking and football. Can’t have that, now can we?

My friends wanted to see an Arsenal game and a NFL Global game that was happening the same weekend, and I was looking for a fall trip, so after a little convincing, I booked my October trip to England and Scotland with three goals in mind- Food, drink, and football.

And what’s the best way to begin a stay in London?

Going to a pub, grabbing a brew and a plate of fish n’ chips before the jet lag from a 14 hour flight kicks in, of course.

I’ve heard that a lot of the older individual pubs that used to be on every street are closing down, and it’s corroborated by the fact that most of the pubs we went to in London were the same chain. For what it’s worth, their fish n’ chips were decent and they had their own line of beers featuring brown ales, IPAs, and pale ales. The pub was close to the airbnb me and 2 of my friends were staying in, right beside Little Vienna- a business district with a canal featuring various businesses, restaurants, and bars dotted alongside of it, which gave a real ‘live, work, play’ type of vibe.

Our first full day in London covered the essentials (as it was my friends’ first time in London). We saw Piccadilly Circus, Chinatown, Buckingham Palace, Hyde Park, and Big Ben but with a twist- we covered the distance on foot. 5 miles to see some of the biggest London tourist attractions seems daunting, but it was also a really good way to get to know the streets and see London in a way you couldn’t see from riding the Underground or Ubers all day.

For dinner, we wanted to eat beef wellington. You know, that fancy roast beef with puff pastry wrapped around it, the one that Gordon Ramsay makes in countless shows and YouTube videos? And where better than one of his restaurants to try it?

Well turns out he’s a popular chef, and the restaurant we walked in had no room for three. Fortunately, he had an asian fusion restaurant right next door, so in a sense, we went for something we were familiar with. Gordon Ramsay’s Lucky Cat is reminiscent of a 1930’s ultra sleek diner, with copper, black furniture, and low lights galore. The food itself was good; the only surprising bite of the night was something called ‘jfc’- a type of fried chicken with spicy Korean miso sauce. And it was HOT. Not a bad meal by any means, but if you’re looking for new flavors and dishes asian fusion is old hat for any Hawaiian. 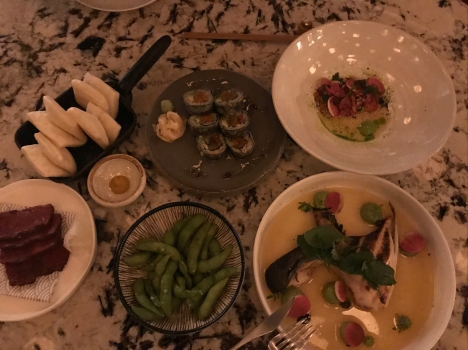 Disclaimer- Now I’m not saying that going to specifically an Arsenal game is the most fun I had in London, but I’ll say that Arsenal was one of the two teams playing the day I went to watch a football game.

And it was hella fun.

From the coordinated chants of the visitors, the plethora of goals scored, the huge stadium, OUR SEATS, and the open sky over the pitch, the match was nothing short of epic. 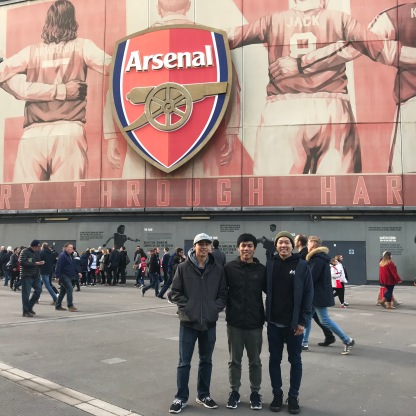 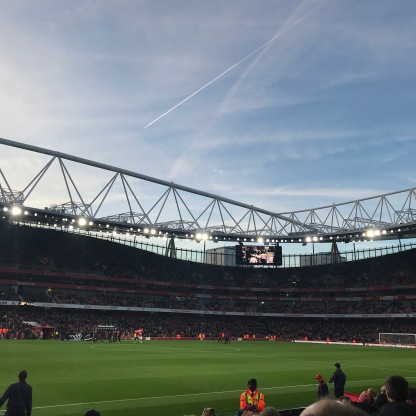 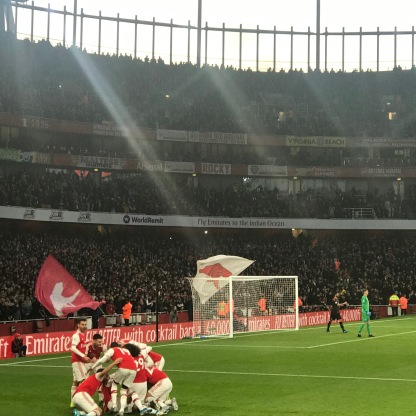 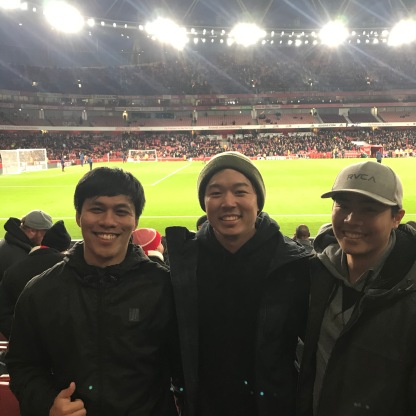 There’s something to be said for sporting events in the sense that it brings community, shares triumph and defeat, and hold a place in the unique culture of a place, but this isn’t the article for that, so we’ll leave it at ‘It was the best time I had in London.’

My requirements for this leg of the trip were simple: good food and good whisky. And boy did that deliver.

The train from London to Edinburgh took about four hours; allowing us to get a preview of the rolling countryside farms and quaint English towns while sitting/standing uncomfortably between train cars.

Compared to that, Edinburgh was like being transported to the old world. Wide cobblestone roads, large flat stone buildings making rigid squares, with Gothic architecture lining the rooftops and spires greeted me as I walked above ground from the train station. 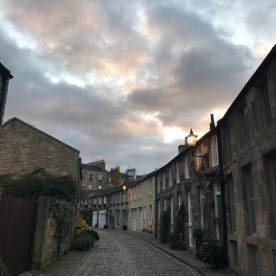 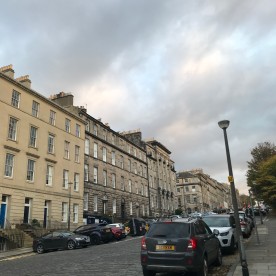 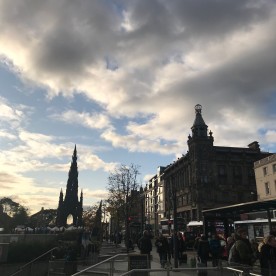 Talk about a first look.

Our first dinner was a restaurant called Devil’s Advocate, which specialized in upscale Scottish food. It was here I had my first taste of haggis- ‘a Scottish dish consisting of a sheep’s or calf’s offal mixed with suet, oatmeal, and seasoning and boiled in a bag, traditionally one made from the animal’s stomach.’ Sounds a little funky right?

It’s more like a really tasty meatloaf; mine was herby, crumbly, salty, and creamy the way offal usually is. I’m a fan of uncommon cuts of meat and I’ll try anything once, but I think I had haggis two or three times on this trip alone. Bag and boil me cuz I’m a haggis fan now. 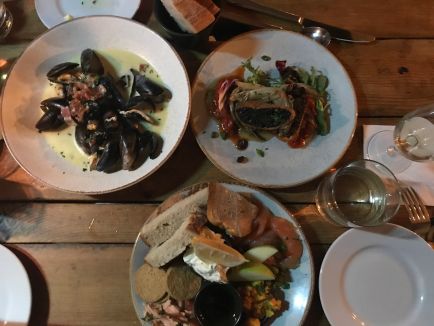 We woke up early the next morning to meet at a coffee shop owned by the tour company we hired. As I had never done a distillery tour before, I was excited to see how whisky was made, as well as see more of the Scottish countryside. Our tour guide was Duncan; a boisterous older Scotsman with a thick accent, who drove us through winding two lane country roads while regaling us with the history of the region, Scottish jokes, and exposing us to the music and the culture of Scotland. Really; just all you can ask for in a tour guide.

After visiting William Wallace’s castle and quick nap (or three), we arrived at the first distillery- Glengoyne.

I’m not producing a How it’s Made video on scotch, so here’s one to catch you up to speed. Glengoyne itself was nestled against a hill, with a small waterfall near the edge of the property. Actually walking through the process of how one of my favorite drinks was made was a very interesting journey and made me even a bigger fan of Scotch.

Next up was Deanston, next to the River Teith. It was more of the same, but the facility was on a larger scale and seemed a little more industrial than Glengoyne. Needless to say, both places had excellent whiskys.

A ride home along several stops (including Loch Lomond), I arrived home with a bottle of Glengoyne 18 tucked under my arm and a little more enlightened about this ancient country and its favorite drink. 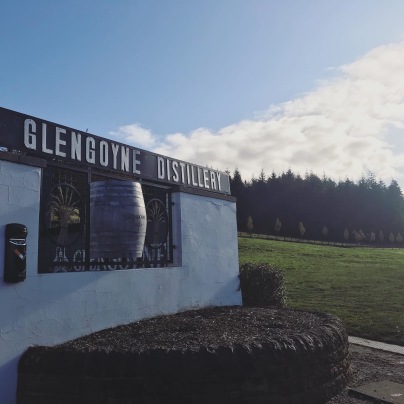 The last day was for the culture, visiting Edinburgh Castle, walking the streets of Edinburgh, and trying to get some instagrammable photos. We ended the day at a Whisky Experience bar, where I tried a flight (or two) of whiskys and brought another one home.

Scotland was the highlight of the trip by far. Edinburgh and it’s people were full of a light hearted chippyness that despite the cold region they lived in, radiated a warmth and charm. It’s an experience I’ll take with me for the rest of my life and I think I’ll be back some day for a longer trip. After all that was said though, I definitely accomplished my two goals for travelling to the UK, and I’m pleased with all the little discoveries and experiences I had in between those two goals.

Maybe next time I go, I’ll find the Grail.