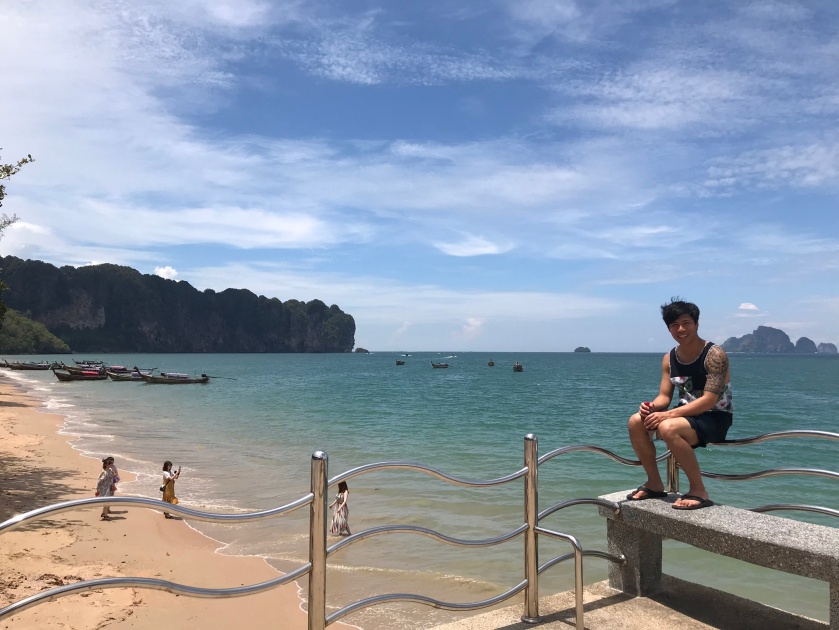 Postcards. Random wallpapers on office computers. Vague images in my head of a small boat cruising through towering island formations just off shore of a white sandy beach. Everything I knew about Thailand couldn’t fill an annotation in a book, yet in the Spring of 2018, I headed there with a friend, ready to escape the cold grind of work and weather that had occupied the first quarter of 2018 in Shanghai.

Disinterested in another city and being swallowed by the hustle and bustle, we aimed for a slower-paced vacation, where we could take our time and really absorb the sights, sounds, and tastes of the area, something I feel I wasn’t able to do much of in Bali.

For travelers to Thailand, this usually means heading to Krabi and Ao Nang.

Krabi Town is a small fishing village, while Ao Nang is slightly more touristy, with the trade-off of being right on the beach.

I personally went as a traveler with an interest in Thai food and a desire to unwind while experiencing new sights and sounds. I found what I was looking for and Krabi really felt like another world from the concrete jungle I had been inhabiting for the past year.

Here are some highlights of my temporary retreat from the known.

We stayed at an Ao Nang Hotel called ‘Apple a Day’, a chic resort with a weird fascination for apples and yonic imagery (see images below). I think that we learned from our experiences traveling in Malaysia and Bali, and this time spent a little more on our room to ensure that our vacation would actually be comfortable. The stereotype is that Thai people are renown for their hospitality, but while the facilities and amenities were fantastic for a small beach town, I found that the staff were strictly business polite (not that I have a problem with that, but it was a little surprising to see that stereotype not be universally true in the hospitality industry in Thailand). 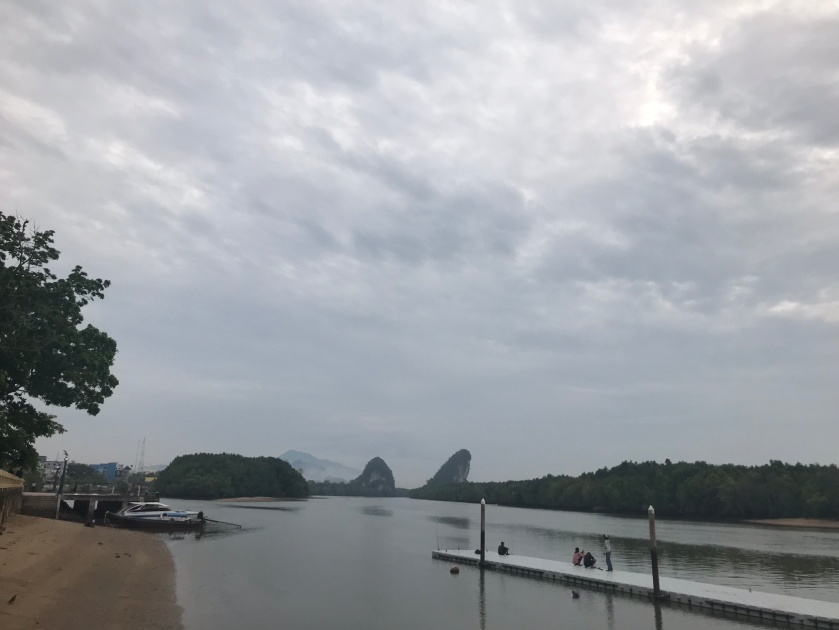 The first day was slow paced. I had to wait for my friend to arrive so I spent the day the way anyone who grew up in Hawaii would. I went to the beach and found a nice spot, parked my butt, and slept off the jet lag to the soft sounds of the wind and the waves. At night, we went to a night market in Ao Nang- A vibrantly lit square with a few rows of shops, a center stage where a lone woman sang English, Chinese, and Thai songs, and a few rows of food stalls, surrounded by places to buy libations. There was a nice mix of locals and tourists from all over (but especially China). We soaked in the warm night, hot food, and cold beer as we watched the performer entertain a small crowd. Nothing like Mardi Gras or some fervent festival. So basically, exactly what I went there for. 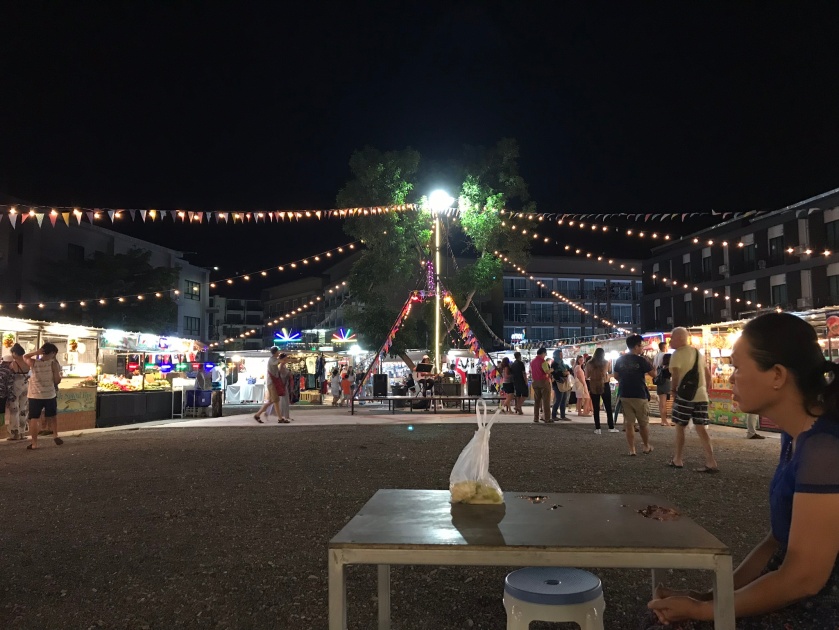 The highlight of my trip was probably the second day, when we took a guided boat cruise through four islands off the coast of Ao Nang. The four island cruise is the second most popular tourist attraction in Krabi other than going to Koh Phi Phi, an island made famous by the movie ‘The Beach’ featuring Leonardo DiCaprio (We skipped this particular island because we read that a gargantuan amount of tourists come to Thailand just to visit Koh Phi Phi and that our time was better spent elsewhere). The four island cruise wasn’t just visiting four different rock formations and relaxing on the beach though. On the first island, there was a cave with a small shrine, a small beach, and a rock face that others were rock climbing on. The second was a wildlife preserve for birds, so we didn’t actually even go on it; rather, we were invited to snorkel around the clear water while the boat anchored for 30 minutes. There was a great variety of fish and it was pleasant to be in the cool water on a warm day. The third island was a small sand bar connecting two small islands, where we got a lot of sunbathing done. Finally, the fourth and largest island feature expansive beaches where all the tours concluded, and provided free lunch for the tour group. All in all, I’d say that this full-day tour was really well paced, priced, and offered a good mix of adventure and relaxation. 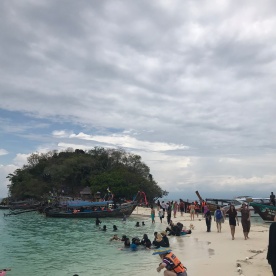 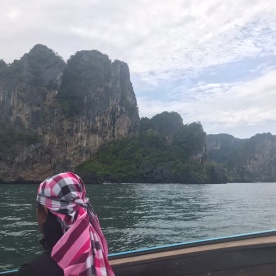 On the third day, we went to the emerald pools and Tiger Temple Buddha. Known for its deep green waters, the Emerald Pools were an hour car ride and 30 minute walk inland, surrounded by a forest path. It was quite beautiful, but way too crowded to get the sense of serenity the pools advertised. The Tiger Temple Buddha is a towering golden buddha sitting atop a mountain that goes straight up. It’s roughly 1,200 steps from the temple grounds to the peak. And I climbed every. single. step. It took about 30 minutes to scale, but the view was well worth it. Krabi and the surrounding area is largely flat, minus the mountains that you’re atop of, so the view that you get is truly breathtaking. I’m constantly in wonder of the work people will put into building monuments to religions and governments, and it’s a constant reminder of what life was like back then and what was important to them.

I’d be remiss if I went to Thailand without getting a world-famous Thai massage. And I’m not talking about the happy-ever-after. My previous experience with massages have only been for physical therapy whilst running for cross country and track. From what I can recall of the Thai massage, there was a lot of pressing in the massage, and the guy really focused on the hamstrings and back. It was a decent massage, and well worth the price, so if you’re ever in Thailand it’s something I’d recommend, especially if you carry a lot of stress with you.

But Krabi wasn’t all sand, sea, and relaxation.

It was also food.

Lots and lots of food.

Thai food is pretty big in Hawaii, so I had grown up eating a variety of Thai dishes, and I was pretty excited to try a variety of spicy, sweet, and delicious local foods.

I ate delightfully spicy and savory Phaneng curry paired with cold beer at the night market, as well as the rich Massaman curry, perfectly paired with sticky rice and a thick and sweet mango smoothie. Curry is one of my favorite foods for its complex flavors, variety, and for how satisfying it is. To have it in Thailand with fresh veggies and seafood is a foodie dream fulfilled.

I also ate a lot of fresh seafood. Being by the ocean, it’s not surprising that a vast majority of the culinary offerings in Krabi tout fresh or live seafood, and the place we went to (twice) offered an assortment of denizens of the deep for cheap. We had large mantis shrimp, fish, crab, and tiger prawns, all cooked with a garlicky, spicy mix of flavor and a large mug of cold Tiger beer.

I also tried durian for the 3rd time, and find that it gets slightly less nasty every time I try it. Maybe one day I’ll consider it palatable. 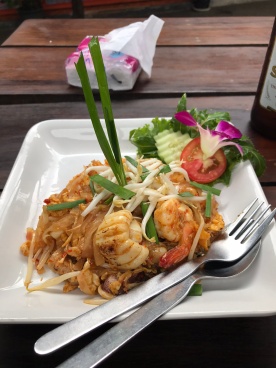 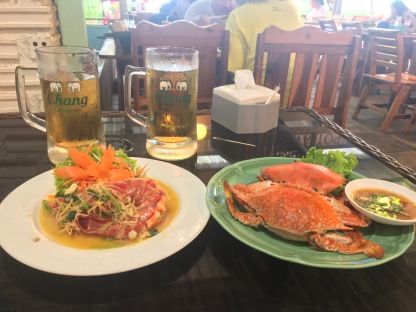 If you want a great mix of adventure, culture, nature, and food, put Krabi on your list. It will probably be a little pricey to get there, but once you do, the prices make it easy to unwind without breaking the bank.

Come kick it in Krabi.