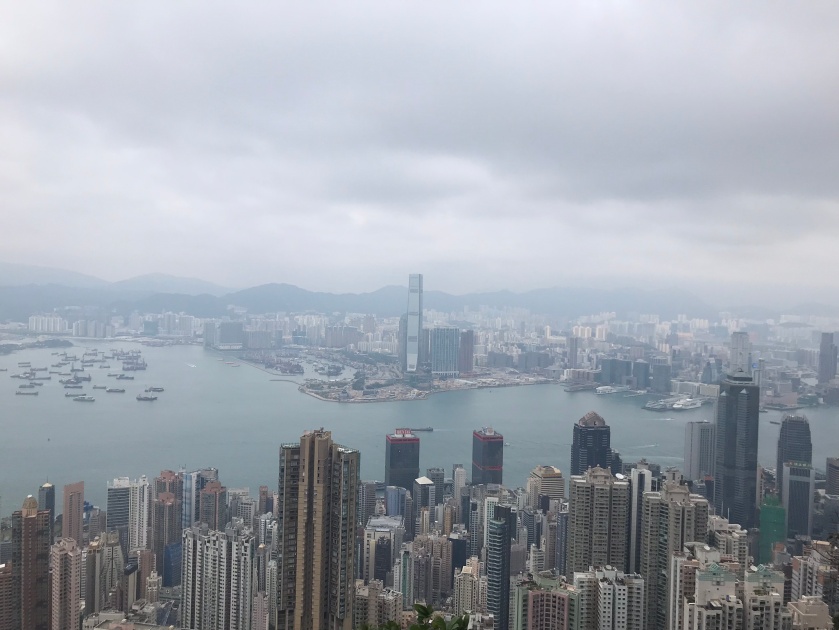 If Shanghai is the city that mixes New and Old (Bleeding edge modernity with ancient tradition and culture) then Hong Kong is a city that clashes its hyper urban development with towering mountains and nature. The breathtaking beauty of the mountains surrounding the Po Lin Monastery vs. the bustle and vibrancy of Kowloon’s nightlife. The modern office buildings of Central vs. the towering Victoria Peak right behind it. I saw Hong Kong as a mix of natural and human landscapes in jarring contrast to one another- in a way that made my short three day trip there unforgettable.

My trip to Hong Kong was one that I wasn’t actually too excited for; it was going to be my first time travelling alone, I didn’t actually know too much about the place or have much reason for going there other than the fact that I’m in China so it’d be kind of a waste not to see it. Another motivation for going is that my grandma was born somewhere in south China (not sure where), so it’d be interesting to go to the region I might originate from. That and I love Cantonese style Chinese food, which is what I ate growing up. However, I was decently skeptical that I’d have a good time. So, I boarded my plane early in the morning with guarded expectations.

Arriving in Hong Kong, the first thing I noticed was the air pollution. For those of you who don’t know, the air pollution in China is pretty bad. Some days in Shanghai, it’s like a dense fog has nestled itself just over the many buildings. When I went to Beijing, I experienced more of the same, so when I say the first thing I noticed was the air quality, that’s saying something. I’ve read online that during the winter is when it’s worst for both Shanghai and Hong Kong and based on my experience, it’s something that I can corroborate as fact. It wasn’t going to stop me from trying to get the most out of my trip though, so with my mask on, I proceeded to the cable car to Ngong Ping; the village at the foot of the Po Lin Monastery and the first item on my meticulously crafted itinerary (that pretty much went out the window by day 2).

The cable car up to the Monastery was something that I was originally going to skip, but my friend recommended it to me as one of the few things I absolutely needed to do while I’m there, and I’m glad that I took that advice. The cable car was a 20 minute ride from a transit station to the village of Ngong Ping, slowly rising and carrying a cabin of around 6 passengers up over the sea and mountainside. The aerial view that we got of the calm waters surrounding Lantau Island was pretty stunning despite the smog. Upon arrival, I made my way through the small tourist town selling various merchandise and headed to the Monastery grounds. On my way over, I could already see the towering Buddha statue, so the excitement had been building for quite some time and I was eager to see it up close. After scaling the steep steps I was able to see it up close. I know that there’s several of these large Buddhas scattered throughout Asia, but this was the first one that I’ve seen so it was a very interesting sight for me. Even as a tourist destination, I could feel the spiritual impact of the place. I gained a sense of how important Buddhism is to the culture and history of Hong Kong and being surrounded by dense green forest really made it seem like I was in another world and another time.

After taking the cable car back down the mountain, I boarded a bus to my hostel, located in the heart of the Kowloon area of Hong Kong. Hong Kong is essentially made of two main parts separated by a channel; the Kowloon and Central areas, with Kowloon being older and larger and Central being the more modern and developed area.

Kowloon was looked like something straight out of The Fifth Element or a number of sci-fi movies (which may or may not have used the city as reference. Buildings haphazardly stacked on top of each other, narrow streets swarmed with people, the neon lights of restaurant signs and advertisements hanging all the way into the street.

Kowloon felt alive. Nothing manicured, refined, and cookie cutter about it. Even the H&M I stumbled across was nestled in between a park and a row of food stalls, the bottom half what looked to be a small apartment building. Global conglomerates don’t command the same exclusivity, with McDonalds and Starbucks nestled into the puzzle like configurations of stores on the streets, even resorting to escalators underground, where they can have some degree of control over the space you use to drink lattes and eat Big Macs.

After checking out, I took to the streets, walking the Mongkok area in search of some of my food destinations. To be completely honest, my trip was planned around two things: Hiking (which would be done on the second day), and food. The most important checklist for me was the one that had all of the food spots that I wanted to visit. The Mongkok area was bustling at night, with many of the standard hole-in-the-wall retail stores, restaurants, and food stands sandwiched in between one another. After having a crispy, soft, and sweet pineapple bun and steamy, creamy egg custard from Kam Wah Bakery, I found a deeply satisfying coconut smoothie and had a couple staples of Hong Kong street food- Chao Shao Bao (Char Siu pork buns) and curry fish balls, which were amazingly spicy and tasty.

Day 2 meant adventure and nature. I woke up early, grabbed some water and snacks from the convenience store, and made my way to Dragon’s Rest, a pretty popular hike to the south east of Hong Kong Island.

The bus dropped me off at the foot of the trail, and I proceeded up the trail. The hike lasted about three hours, with a winding path that curved up the mountainside, offering plenty of views and quiet moments. It’s really quite something to hike alone, with only the occasional traveler crossing your path. Up on the windy peak, the panoramic view that Dragon’s Rest offered was sublime. I could see more towering islands in the distance, as well as more bays and cities bordering the coast of Hong Kong Island. After spending a few moments up there, I descended the mountain quickly and exited at Shek-O Beach, a small beach town that reminded me a lot of the towns on the Oregon Coast. The winter winds and cooler weather had scared the surfers away, so I was one of the only people in the small beach town to go down to the sand and spend a few moments with the waves- something that I’ve been dying to do since I left Hawaii.

After I got my fill of the ocean, I boarded the bus and headed to Central.

Central was much more manicured than Kowloon, but was still uniquely uneven, with buildings accommodating the hilltop behind it, and reminded me a bit of San Francisco with its narrow and hilly streets. My first stop was Yut Tok, a small hole in the wall that serves Michelin starred roast goose. The goose was insanely moist and crispy and well worth the cost, which was very low for the average Michelin star meal. It was the best, or at least top 5 roast birds that I have ever had the pleasure of eating, and I’ll surely have dreams about it in the future.

Needing to walk off my lunch, I walked to my second hike of the day-Victoria Peak. It turned out to not be much of hike at all, as I took a scenic tram up the face of Victoria Peak, enjoying a 45 degree ride up to the peak of the mountain. Once there, I walked the Victoria Peak Loop, a 30 minute path that circles around the mountain, with several viewpoints to see Hong Kong in its entirety. Watching the city down below and ships moving in and out of the harbor from above made it really seem like I was removed from civilization, and I soaked up the cool views of the city and channel until the wind started to chill my bones.

Descending down the mountain, I headed towards the food highlight of my trip: Tim Ho Wan.

I had been holding off on eating just any dim sum in Hong Kong because I know that there’s so many places that do it right. But since I was travelling solo it was something I’d probably be only able to eat once, so I wanted the best. Because dim sum is traditionally a lunch time thing, when I went for dinner I didn’t actually have to wait very long to get seated. I ordered Char Siu buns, chicken feet, turnip cake, sticky rice, look fun, and an agar jelly desert with flowers mixed in. It was probably the best dim sum I’ve ever had, and I walked out feeling more stuffed than the Char Siu buns were. I would come back to Hong Kong just to eat there again.

I waddled over to the pier and took the Star Ferry back to the Kowloon side of town, enjoying a quiet night’s ride on the Kowloon Bay, trying to digest the food and events of the day.

My last day was shorter, having to leave for the airport in the evening. I made my way down to Tsim Sha Tsui, an area that attracts a lot of tourists with various shops and sights. The first order of business was watching Star Wars: The Last Jedi. It came out in Hong Kong a day before it did in the states, and since Mainland China delays the releases of Western movies, this would be the only chance I’d get to see the movie in a month. Won’t comment on the movie to spoil it, but suffice it to say, I was satisfied.

After getting some delicious milk tea at Lan Fong Yuen, I visited the Garden of Stars, which pays tribute to various celebrities hailing from Hong Kong. Most importantly to me, was a statue of Bruce Lee. Bruce Lee is the closest thing I have to an idol, for his movies and fight sequences as well as his motivational and philosophical quotes. After grabbing some more egg custard and passable pineapple buns at Tai Cheong Bakery, I relaxed by the docks until it was time to head to the airport.

My trip to Hong Kong was surprisingly fulfilling for me, as I got to do everything I set out to do, saw a lot of nature, and explored a city full of light and life, even in the dead of winter. It’s definitely a place I could see myself coming back to, especially when it’s a little warmer and sunnier out. Travelling solo gave me a lot of space to observe, reflect, and be present within myself and in my surroundings and while it was something I was initially apprehensive about, I’m extremely glad I made the decision to do so.

To see pictures of my time in Hong Kong, visit: https://goo.gl/WX9M8X